GNU nano is my editor of choice

I have been using GNU nano for the overwhelming majority of my life.  Like an old friend, nano has always been reliable and has never failed me where other text editors have.  By far, it has been the most influential software I have ever used regarding how I approach the design of my own software.

The vim vs emacs flame war

I’ve used both vim and emacs.  I don’t like either of them, for differing reasons: modal editing doesn’t really fit my mental model of how an editor should work, and Emacs Lisp is not really a particularly fun language to use simply for customizing the behavior of an editor – as they say, Emacs is a nice operating system, it just needs a good editor.

In all cases, I think nano is a much better editor (at least for me), as when properly configured (and previously with some patching), it provides all of the features from vim I would want anyway, but in a modeless format.

A note about pico

As most people know, GNU nano began its life as a clone of UW pico.  Pico (short for PIne COmposer) was bundled with the PINE email client, which was written by the University of Washington.  Unfortunately, PINE was distributed under a custom license which had many problems.  This was eventually solved when the University of Washington released ALPINE (short for Alternatively Licensed PINE) under the Apache 2.0 license.

The licensing problem in combination with a desire to make a more capable editor based on the overall pico user experience led to the creation of GNU nano.

In the Alpine Linux distribution, both pico and nano are available.  Here’s what pico looks like by default: 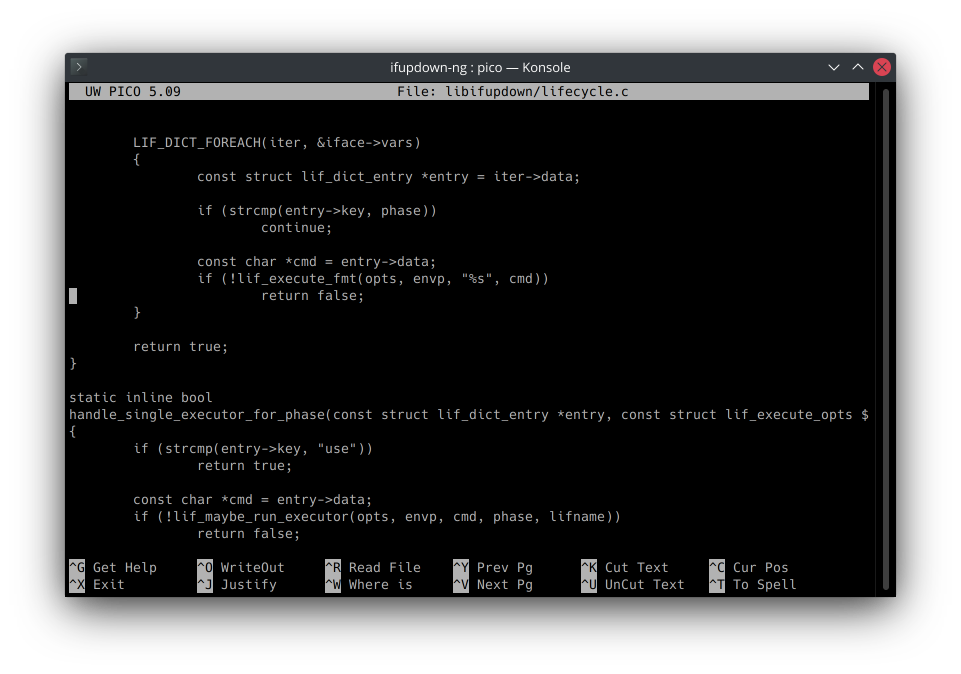 Like with pico, the default UI for nano is quite boring to look at.  Here is GNU nano displaying the same file with the default configuration: 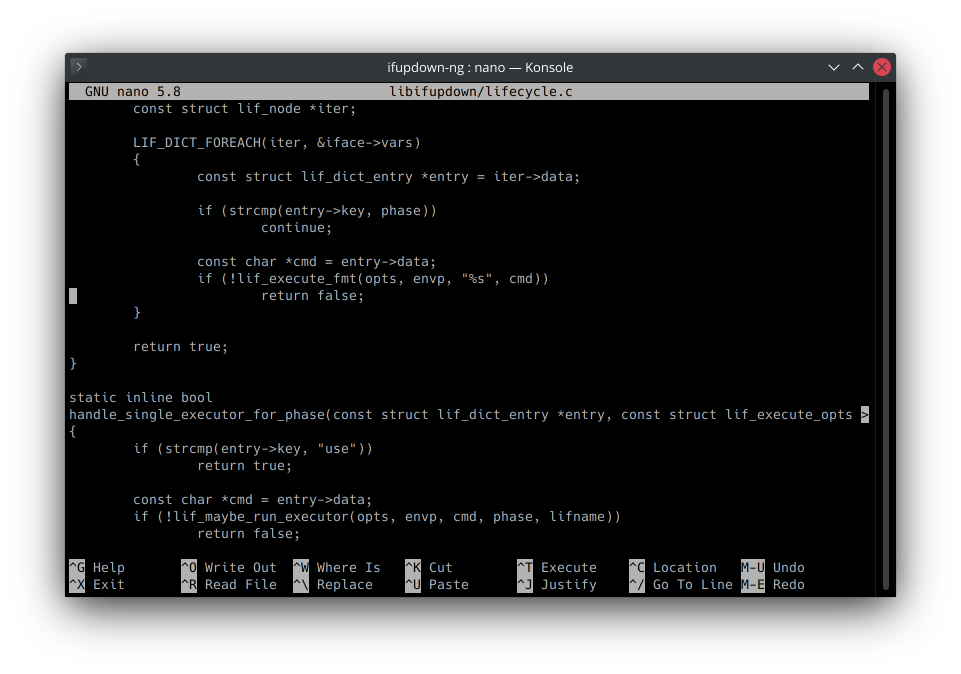 As you can hopefully see, the default nano configuration is quite similar to that of pico.  However, unlike pico, it can be changed by editing the ~/.nanorc file.

But how do we get there?  The answer is simple: we use the ~/.nanorc file. 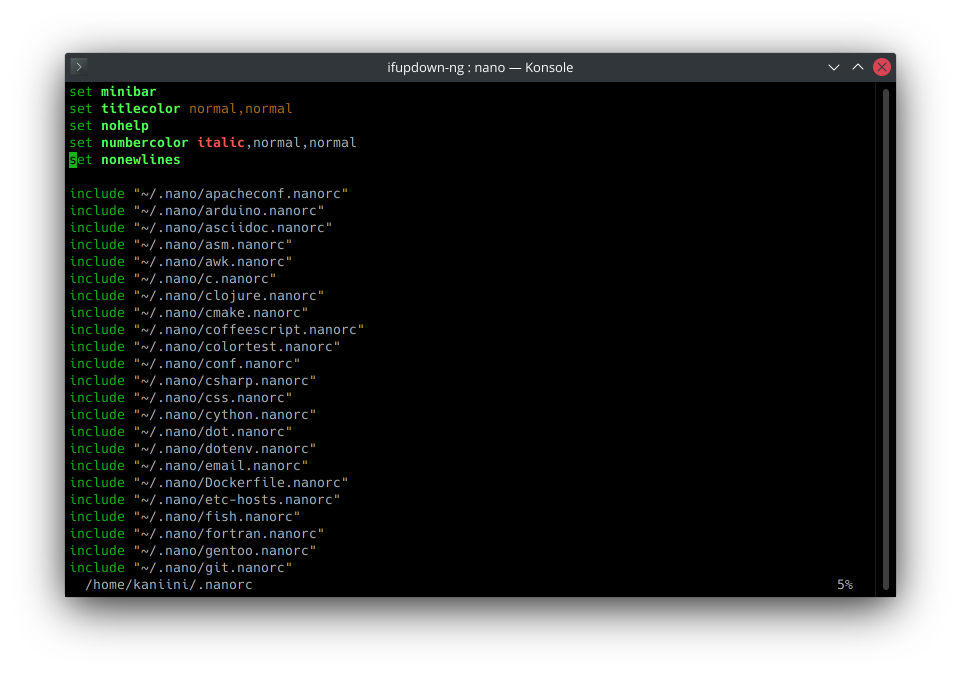 As a result of many people wanting the same thing: vim-like functionality with modeless editing, nano gained several third-party patches which allowed for this.  For the most part, these patches (or equivalent functionality) have been included upstream in recent years.

Getting most of the way to a vim-like look and feel, without syntax highlighting, is quite simple.  You simply need to add these lines to your ~/.nanorc file with any recent version of nano: 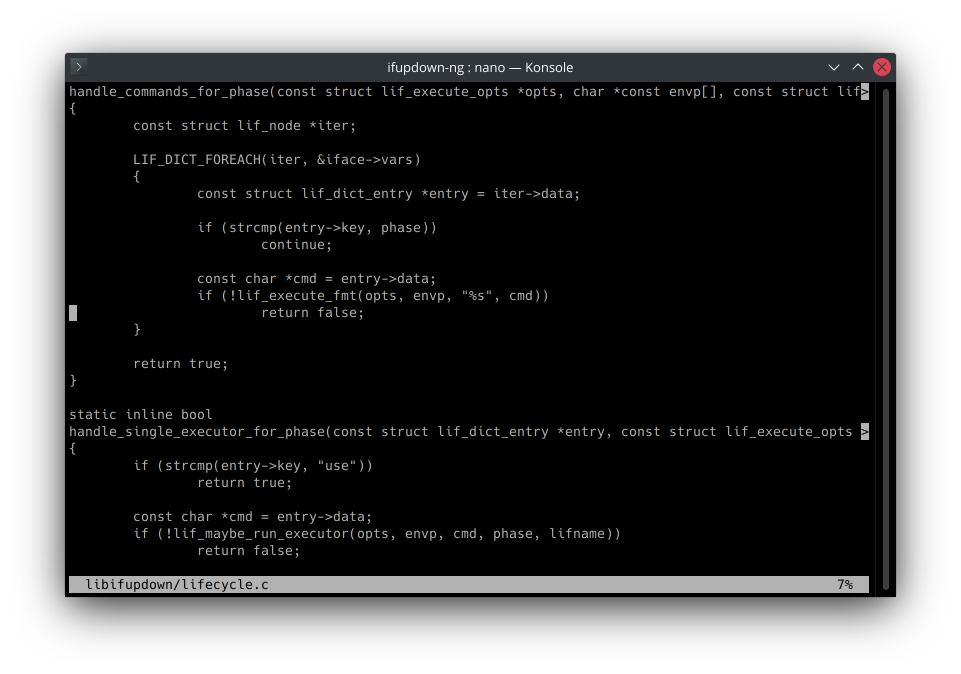 The way this works is by setting the foreground and background colors for the titlebar to normal, which means that nano shouldn’t change whatever color is already set.  That gives us: 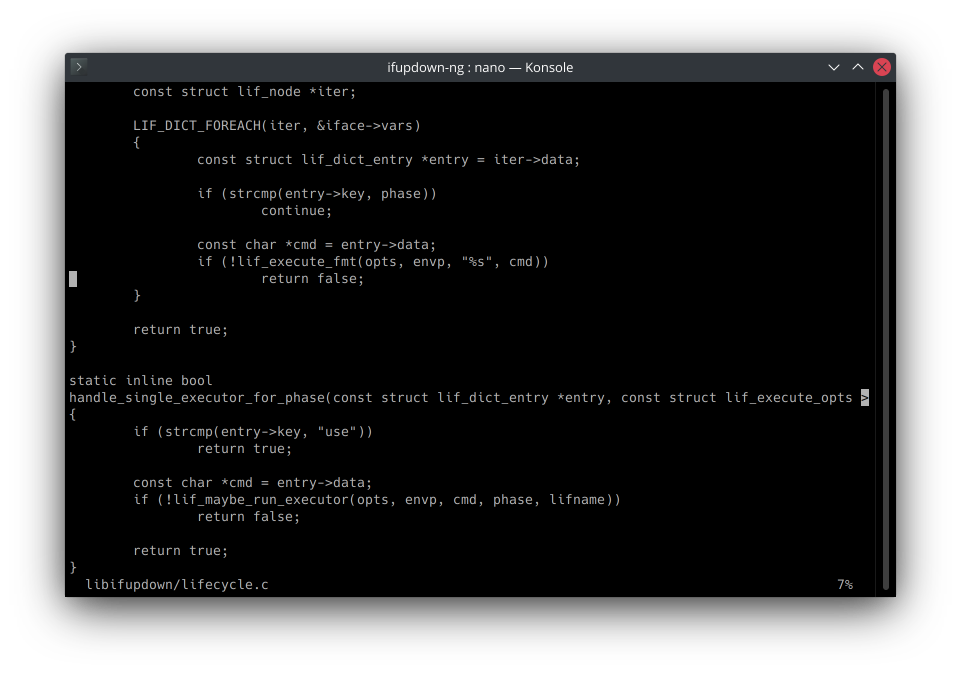 Instead, I use an improved syntax highlighting package that is distributed on GitHub.  To install it, you can just do something like:

Once you do that, you’re done and left with a nano that looks like this:

Hopefully this post demonstrates that nano is a quite capable editor in its own right.